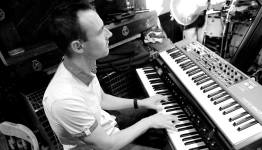 Stuart is a top-notch keyboard player with a phenominal sound. One of the quietest members of the band, Stu makes up for this by filling the music with a rich, full sound that balances the rest of the band to perfection. He has a versatile style and ability to play just the right stuff to suit any genre of music that the band pick.

Having played with a couple of other Kent-based bands before joining The Choos, Stuart has a wealth of musical experience which he often shows while playing and is without doubt a natural keyboard player.

The band often hear him playing some of his favourite riffs during rehearsals and warm-ups prior to gigs, where he exposes just how good a keyboard he is, and he is always trying to persuade the band to try stuff that is a little more complicated than the current choice of songs allows.

Stuart's real job is... er,...well, don't really know exactly what he does but he is some form of techno-whizkid who uses computers to make things work... or something..maybe he will tell us one day!