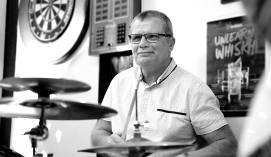 Kev is the `engine room' that keeps The Choos driving along throughout every gig. As the most mature member of the band (ok, eldest) he has thousands of hours worth of live playing experience in a wealth of different bands over the last 30 or so years. One of the founder members of The Choos, Kev's precise drum playing is the key to the very tight sound that the band are known for.

Kev's previous musical exploits include nearly every style or genre of music known to man and he somehow seems to already know the right drum parts for any song that gets thrown at him.

Kev also deps on the drums for a number of other bands aournd Kent and is well know by a lot of other muso's in the area. He fills his days by pretending to be a teacher apparently.... (poor kids)...

Read Kev's extensive musical `CV' below, then scroll down for some pics....

I started playing at 15 on a set of tin cans to see if I could do it! Friends had a band and needed a drummer so I had a go. They convinced me to buy a set of Olympic drums, with a tom tom that fell off the bass drum, from Eric Snowball’s shop in Maidstone. They cost £50, which was all my savings and a HP agreement of £4 a month for a year! I’ve been in debt buying drums ever since.

That first band was called Kaleidoscopic Tears, which was soon changed to Creation Itself. The first song I learnt was a Cream number called White Room. We played covers of rock and prog rock songs, and with our limited talents it must have been something to listen to.

We eventually changed our name and line-up to become Sanzark. We wrote all our own songs and firmly believed we were going to be rich and famous. I remember that at the end of our set the guitarist dropped his amp on full echo to get the explosion at the end of a song called After the Bomb (a happy little number). I still have the poster advertising a Sittingbourne Town Hall gig, supporting a band called Beckett. It was 70p in advance and 85p on the door.

Various rock and pop bands followed and I started to play with a few function bands to help keep the money coming in. I played for some time with a band called Cross Section, who were featured in the film Quadraphenia, before I joined them of course.

I then joined a band called Chalet, playing original Folk Rock all over the place trying to get a deal. Punk Rock killed that dream and it was back to the function/cabaret scene until I joined a band called Chevogue, who were an 80’s New Romantic band, playing our own compositions. After a small amount of local success and a few bigger gigs we folded but I enjoyed that time very much. This was when Brett from the band started to call me Bingo, a name that I still get called on many occasions.

I then played in a band called 1st Offence, playing Pub Rock covers. We enjoyed local success and had a great time on stage. Many times half my kit would disappear while I was still playing it as the guitarist redistributed my stands around the stage.

The Brothers Grimm came soon after that. We were a Blues Brothers tribute band, wearing the suit, hat and glasses and playing right on the edge most of the time. I was the second drummer, the first one wasn’t loud enough, and found playing to packed local pubs addictive. We did play in the Thomas‘s Beckett pub in London almost every week and once we played to 3 blokes and a dog, it wasn’t all beer and skittles. I was sacked (as were most people at one time or another), but rejoined just as the band started to find work with the Hells Angels and biker clubs. This took us further afield in Britain, including some hairy times in Belfast during the height of the troubles, and across Europe. The summer months were mainly bike festivals and the winter months were bike clubs and everything else, including a wedding in Essex, which was a tad surreal. Having been sacked for the 3rd or 4th time I decided it was time to move on. I had a great time and look back with the usual rose tinted glasses for those years.

I decided to get a degree; anything was better than going back to work. During the 5 years it took to complete my studies I played in countless Country and Western bands to earn enough to pay my share of the bills. Most were turn up and play gigs, which involved being introduced to the band members on stage as we set up the gear. I did lots of tours in the holidays and saw most of the UK from the back of various vans in different states of repair and comfort.

During this time I completed a two week tour with the American harp player, Bill Dicey. We were invited to play a session at the Maidervale Studios for the BBC. The tracks and an interview with Bill were broadcast soon after in Paul Jones Blues Show on Radio 2. This is the only time I have had my name mentioned on national radio.

Once I became a full time teacher I no longer had the time to gig so often. It was then that I met up with Peter and Martin in a band called Simply Soul. We didn’t do many gigs but it did lead to my joining their next band, Out of the Blue, another Blues Brothers tribute. At least I knew most of the songs. We managed to find a good few gigs and it was fun to do.

I still play with other bands, when they haven’t got their regular drummer and I can be sometimes seen as the house drummer at the Lower Bell jam nights on a Monday evening.

I use a Zoom drum machine as a click.

3 Premier (including a double bass kit with 28” bass drums)

Rototoms with a handmade bass drum.

Kev the drummer in his early days as a muso... have a look at the great pics in his own gallery below!