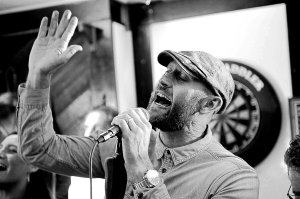 Andy took to the stage with The Choos in December 2014 and from the word go was given the seal of approval from the die-hard fans at how well he fitted in. Andy has spent the last 8 years honing his dulcet tones at the majority of venues across London and the South East and is a truly talented vocalist.

His love for Soul music and iconic artists such as Stevie Wonder, Donny Hathaway and Marvin Gaye (to name but a few) are easy to see as his influences when you hear the raspy, soulful tone in his performance.

Andy says that when he heard the Choos live for the first time, he knew that they were the band for him. He loves to perform and get the crowd on their feet and wants to bring a fresh edge to the band and keep adding great new songs to the playlist.