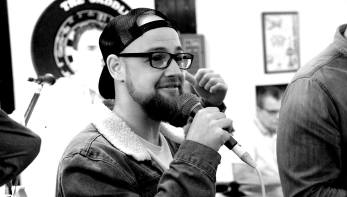 Having a love for music from a very young age but never having a natural talent for playing an instrument, Ben decided to take the technical route and went onto study Creative Studio Production at the University of Kent. It was here he spent much of his time in the studio making, mixing and mastering live sound and electronic produced music.

After graduating, Ben searched for a position in the industry and still aspires to work with sound professionally.  Working with The Choos is a great opportunity to gain ‘live sound’ experience for Ben and improve his judgement of sound.

Outside of the band, Ben is a Manager at a local leisure complex but spends much of his spare time making music through ‘sampling’ at home and STILL trying to learn an instrument!

Main influences musically would be Reggae (thanks to his mother) Rhythm and Blues and Early Hip-Hop.

Although Ben may not play an instrument in The Choos line up he is still considered to be very much a part of the band as he provides and maintains the solid, quality sound that the band produce, often working in `difficult' rooms that have demanding acoustics.